Looking for gait patterns with a specific walking aid?

Within each gait type window, click the corresponding icon to switch between graphic and animation:

Looking for our original stick-figure animations? They're available here:

Research has shown that walking with crutches can require up to twice as much energy as normal gait. How can one then lessen fatigue?

Fortunately, there are various gait patterns that you can use when walking with crutches, forearm or underarm, and they aren't all equally demanding. Whether you're a short or long-term crutch user, the gait you will adopt largely depends on whether you are weight-bearing (on one or both lower extremities), your energy level, body strength, balance and coordination, and the type of walking aid you choose.

If you've just had hip or lower limb surgery, if you are an amputee, paraplegic or have sustained neurological damage, the gait you will adopt will be different from someone who has full use of his/her legs.

Before analyzing gait with a walking aid, it is helpful to understand the mechanics of what is known as a "gait cycle." Gait is more accurately defined as the biomechanics of walking, but for the sake of simplicity, we'll use the terms gait and walking interchangeably. 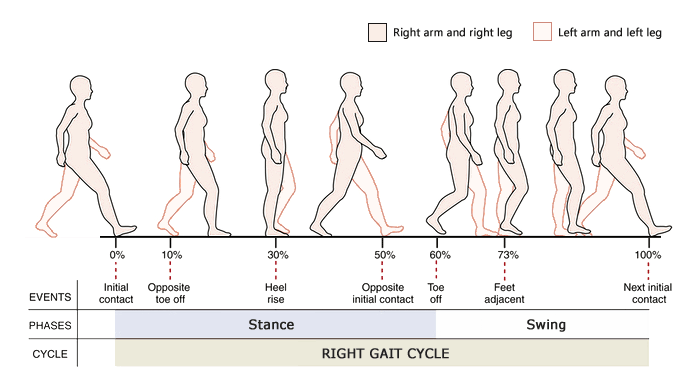 Walking is a complex process combining motor skills, balance and the muscoloskeletal system to repeatedly complete a cycle comprised of a "stance" phase and a "swing" phase. Worth noting is that both feet are on the ground during only 20% of a cycle and that the arms play an important role in maintaining stability during gait: each forward motion of a lower limb is accompanied by a synchronized forward movement of the opposite upper limb. Right leg, left arm. Left leg, right arm. Perfectly synchronised.

The exact same principle is true in 2-point and 4-point gait with crutches, making these two gait types the most natural and the least physically demanding. 3-point, swing-to and swing-through gaits are somewhat more unnatural in that both arms move forward together with your crutches. More on this below.

Disclaimer:
The gait information, graphics and animations are provided merely as informational tools. Only a properly-trained medical professional can assess and evaluate your specific condition and needs.

A cane or single forearm crutch is recommended to people who need additional support when walking. Oftentimes, such necessity results from a weaker or lesser weight-bearing leg or foot. In this situation, the crutch or cane should be used in the hand opposite the weaker leg.

Why? Because the strong leg can bear the person's weight by itself whereas the weaker lower limb is assisted by the weight placed on the ambulation aid, effectively distributing the user's weight among two support points. The only exception to this rule is if that hand or arm is injured or significantly weaker than the other.

If the person is equally strong (or weak) in both lower extremities and uses a cane or crutch for support, then the cane or crutch should generally be used in the stronger hand or arm – the "dominant" one.

Using a single forearm crutch, the 2-point gate is identical except that the forearm cuff "locks" the arm in place, takes the strain off the wrist and provides more security and stability than a cane.

A forearm crutch links up with my arm in two locations making it much more stable than using a cane.

Referred to as "modified" because a single cane is used, this gait consists of a reciprocal movement.

Sequence: cane and affected leg, then strong leg by itself.

Referred to as "modified" because a single forearm crutch is used (instead of 2 crutches), this gait is a similar reciprocal movement as with a single cane. It assumes the affected leg is weight-bearing but weaker than the other leg.

Sequence: forearm crutch and affected leg, then strong leg by itself.

A person on underarm crutches can use either the 3-point, swing-to or swing-through gaits.

Due to the much higher pivot point of an underarm or axillary crutch (the axilla versus the wrist), it is our opinion that this fulcrum is too high to maintain correct posture during other gait patterns.

Your weaker leg moves forward with both crutches, makes contact with the ground but bears minimal weight (less than 50% of body weight). It is a fairly stable and rapid gait.

Sequence: both crutches and affected leg move forward together, then strong leg by itself.

Also known as "step-to", this gait type is common with individuals with limited use of both lower extremities and/or trunk instability (one or both feet make contact with the floor). Both legs follow forward to a height parallel with the crutches ("swing-to") to complete the cycle. Can be used with one or both weight-bearing legs.

Sequence: both crutches move forward, then both legs to an even position with crutch tips.

The only difference with "swing-to" is that the legs move past and land ahead of the crutches. This is the fastest gait pattern but also the least stable and requires significant arm and upper body strength to maintain balance. Can also be used with either one or both legs bearing weight.

Sequence: both crutches, then both legs ahead of the crutches.

A person on forearm crutches (also known as elbow, Lofstrand or Canadian crutches) can use all gait patterns.

A fast and relatively stable gait, it is used with bilateral forearm crutches and consists of a reciprocal movement closely simulating normal gait. It requires coordination and balance but effectively mimics normal gait making it both easy to learn and energy-efficient.

Your weaker leg moves forward with both crutches, makes contact with the ground but bears minimal weight (50% or less of body weight). It is a fairly stable and rapid gait.

Sequence: both crutches and affected leg move forward together, then other leg by itself.

The slowest but also the safest of all gait patterns as there are 3 points of contact with the ground at all times. Used with bilateral ambulation aids and bilateral involvement such as muscle weakness, poor balance or poor coordination. This gait type is also very frequently used with platform crutches.

Also known as "step-to", this gait type is common with individuals with limited use of both lower extremities and/or trunk instability. Both legs follow the forward crutch movement parallel to the crutches ("swing-to") to complete the cycle.

Sequence: both crutches move forward followed by both legs to a position even with the crutch tips.

The only difference with "swing-to" is that the both legs move beyond the crutches. The fastest gait pattern but also the least stable requiring significant arm and upper body strength to maintain balance.

Sequence: both crutches, then both legs ahead of the crutches.

A special thank you to our animation designer Josiah Whitfield. :-)